Breastfeeding is a birthright and crucial for the newborn's survival and is the most effective way to meet the baby's nutritional, immunological and psychological needs (1). Breastfeeding is extensively associated with the reduction of infant morbidity and mortality, as well as with significant benefits for maternal and child health (1–3). In Azores (Portugal), breastfeeding acted as a protective factor for childhood obesity (4). Exclusive breastfeeding also seems to have a potential protective influence on postpartum depression among women with prenatal depression, according to Portuguese researchers (5). Therefore, breastfeeding can be an effective, simple, and affordable tool (4), reducing public health costs by decreasing the use of services (6,7). The promotion and support of breastfeeding is a public health issue (2) and should not be seen as the exclusive responsibility of the woman and her family.

The current official recommendation is for breastfeeding exclusivity for the first six months of life, and to be accompanied by solid foods for at least two years, or for as long as mother and baby wish (9).

The worldwide prevalence of breastfeeding is lower than the recommendations of international organizations, especially in high-income countries, since the prevalence of breastfeeding at 12 months is lower than 20% in these countries (8). However, even in low-income and middle-income countries, only 37% of infants younger than 6 months are exclusively breastfed (8). In the United States of America and Australia only half of the mothers breastfeed their babies until they are six months old and, in the UK, only one-third do so (8,10). In Portugal, according to the Registry of Breastfeeding (Registo do Aleitamento Materno or RAM), in 2013, 98.6% of mothers started breastfeeding in the postpartum hospitalization, but only 76.7% continued the practice after being discharged from the hospital. The records from Primary Health Care show that exclusive breastfeeding between the fifth and sixth week was 88.1%; this percentage drops to 22.1% for five-month-old infants (11). Another publication refers that in Portugal in 2014, the prevalence of exclusive breastfeeding at 3, 4, and 6 months of age was 55.9, 48.5, and 30.3%, respectively (12).

Several factors contribute to the success of breastfeeding; these are described within a complex structure, which includes biological, psychological, and social factors that are linked together at various levels (8). The difficulties experienced by the puerperal woman during breastfeeding contribute significantly to the early interruption of breastfeeding and make mothers less likely to breastfeed a second child (13). However, to have more information about the barriers which mothers face when choosing to breastfeed their children is of great interest to health professionals to improve support and expand the assistance at a community level (14). In a pilot study developed in a region of Portugal, breastfeeding women receiving intensive support during the first 120 days postpartum showed promissory results in improving ‘perception of breastfeeding self-efficacy’ compared to conventional care, favoring breastfeeding duration and exclusivity, and cumulative breastfeeding competence of women/families (15).

For all these reasons, this study aimed to assess the factors which contribute to the prevalence of breastfeeding, namely the information available and education about this topic, support and difficulties which puerperal women may experience, and which of these factors influence early breastfeeding abandonment.

A cross-sectional study was conducted, including a final sample of 351 volunteers. The inclusion criteria consisted of being mothers of children under five years old and having official residence in Portugal. No other non-inclusion criteria were established.

Before data collection, all individuals agreed to participate in the study, giving their informed and written consent to participate. Consent was obtained on the first page of the questionnaire, which included all the information of a “standard” informed consent. Only after reading all the information and selecting the option “I read and agree to participate in the present study” did participants have access to the remainder of the questions. If an individual selected the option “I read the information, and do not agree to participate in the present study,” she was sent to the end of the questionnaire with no access to any question. All the data was confidential and anonymous, and no other information about the participating individuals was collected. The objective of the study, the variables to be evaluated, and the maintenance of anonymity of the data were made available to the participants at the beginning of the questionnaire. The present study was performed following the ethical standards as outlined within the 1964 Declaration of Helsinki and its later amendments or comparable ethical standards.

The distribution of characteristics between groups was compared using Pearson χ2 tests for categorical variables, where the units were expressed in % (n). To analyze the relationship between different variables influencing the duration of breastfeeding, four analysis groups were created: <6 months, 6-12 months, 12-18 months, 18-24 months, and > 24 months. Statistical analysis was performed using IBM Corp. Released 2020. IBM SPSS Statistics for Windows, Version 27.0. Armonk, NY: IBM Corp. All statistical tests were two-tailed and the significance level was set at p<0.05.

According to the breastfeeding knowledge questionnaire, none of the women presented a “very poor” score (0-4 points), 9% had their knowledge qualified as “poor” (5-8 points), 33% were qualified with “reasonable” knowledge (9-11 points) and 58% had a “good” qualification according to the questionnaire (12-15 points) (Figure 1). Table 1 summarizes the characteristics of the study population according to questionnaire score. The breastfeeding knowledge questions and the percentages of correct/incorrect answers for each are displayed in Table 2. The question with the highest number of incorrect answers was “Women who breastfeed should avoid potential allergens” (51.9%), and the statement with the highest number of correct answers was “Formula milk is a better source of nutrients than breast milk” (99.4%). 57% of the population in this study no longer breastfed their children, while 43% of participants were still breastfeeding their babies at the time of the survey. (Figure 2). Among women who were no longer breastfeeding, 49% had breastfed their children for more than 24 months and 29% for less than 6 months. (Figure 3). The most frequent problems with breastfeeding reported were nipple (skin) cracking and pain during breastfeeding (28% and 27%, respectively) (Figure 4). 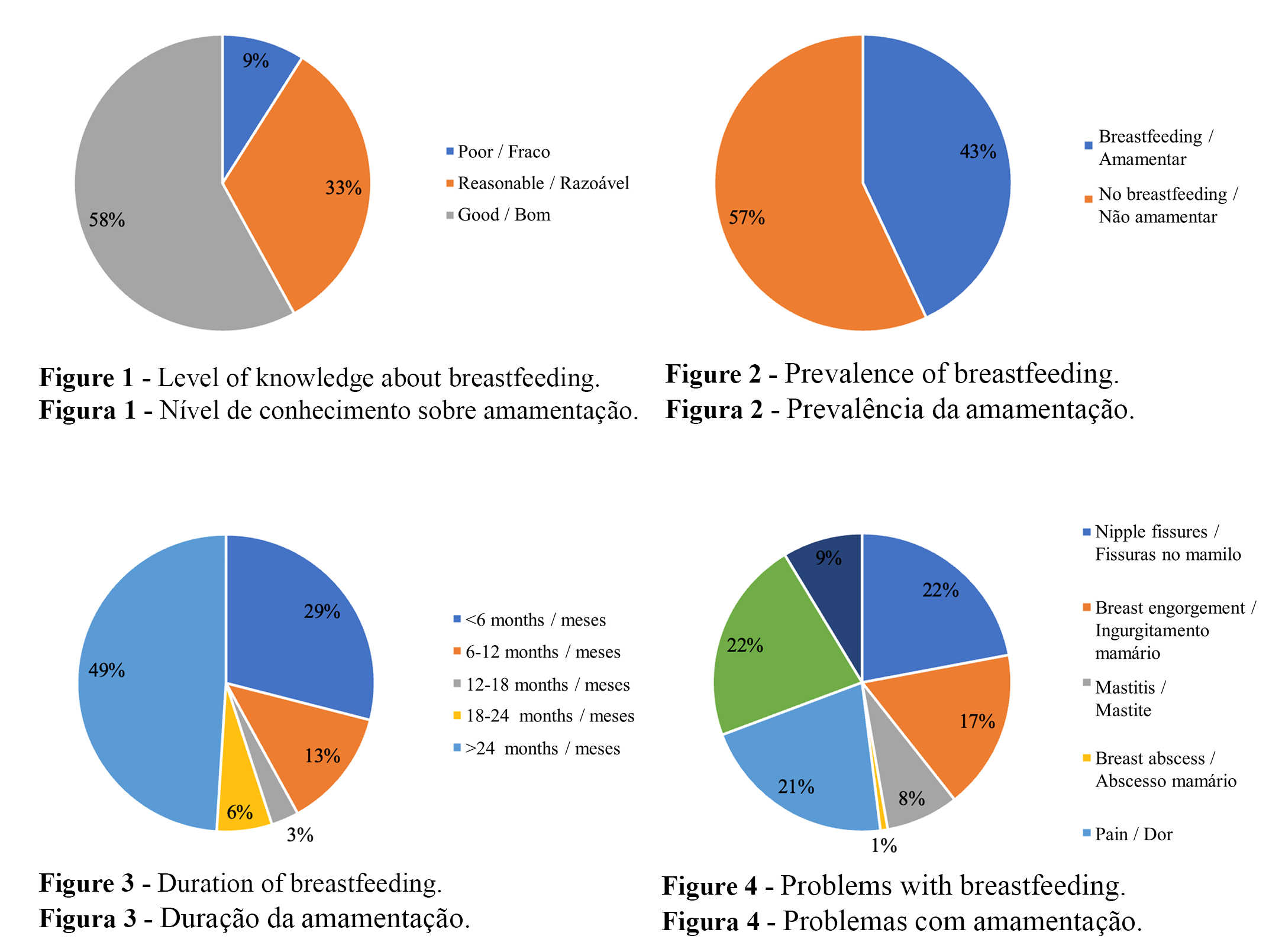 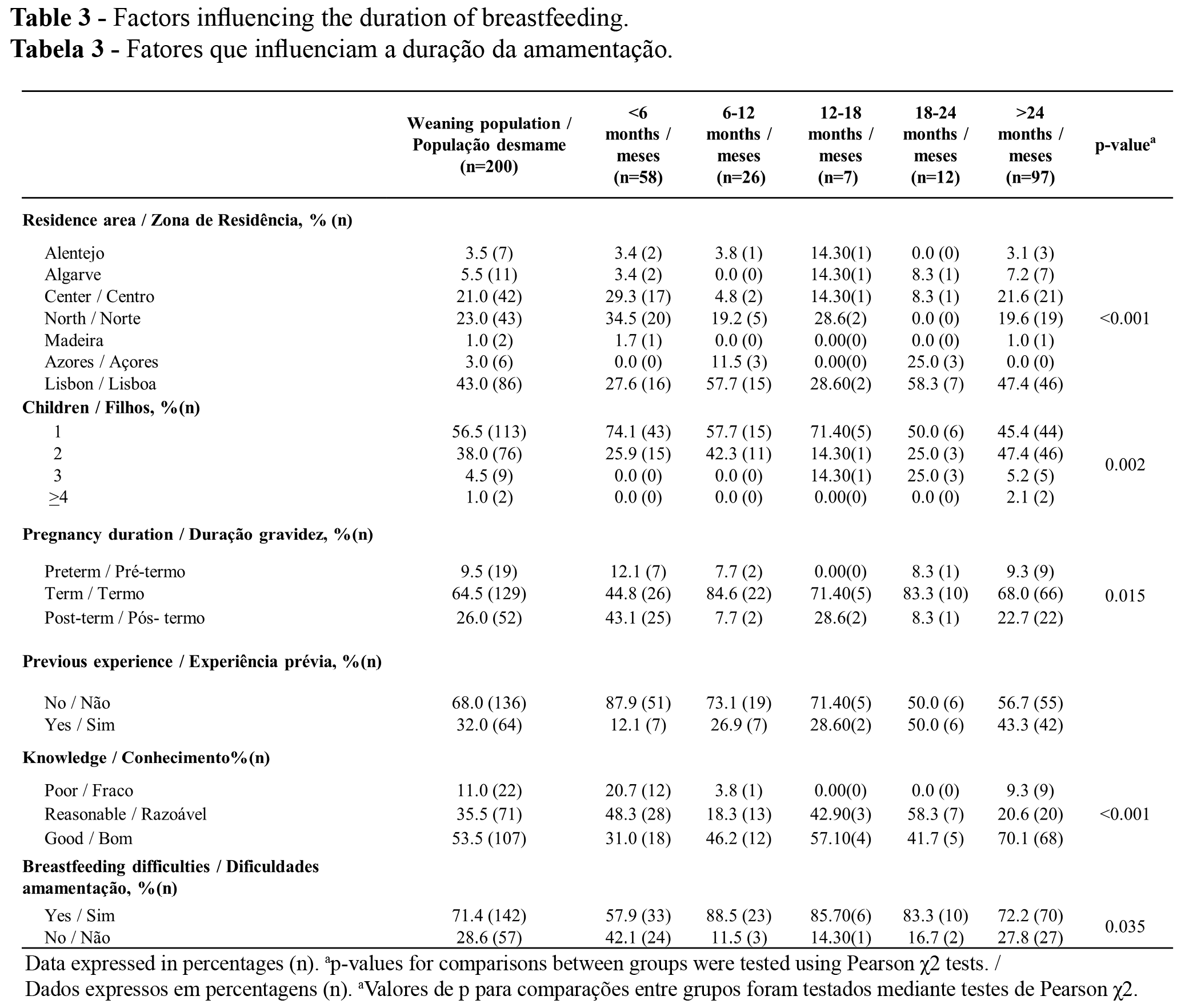 The present work was one of the first studies to look into which factors influenced the duration of breastfeeding according to World Health Organization guidelines (9) in Portuguese women with children younger than 5 years old.

The main results show a significant association between maternal information about breastfeeding and the duration of breastfeeding. Women who breastfed their children for more than 2 years also presented higher scores on the breastfeeding information questionnaire, while women who breastfed their children for less than 6 months showed lower scores. Similar results were also observed by different authors (17,18). Thereafter, we demonstrated that the highest level of knowledge about breastfeeding is a protective factor against the early cessation of breastfeeding. According to the percentages of incorrect answers, 47% of mothers are not informed about the recommendation (9) “Breastfeeding should be maintained until, at least, 2 years old; before that age, it is considered premature cessation”. Furthermore, 49.3% of them are unaware that “Formula-fed babies have an increased risk of becoming obese in adulthood” according to the last evidence (19). This performance shows that mothers who choose not to breastfeed may not be fully informed about the consequences of this choice. Over 50% of participants believe that “Lactating mothers should avoid potential allergens”, which do not correspond with the most recent published literature (20). A study conducted in Poland shows similar performance among participants, where 44.6% of the participants also believed they should avoid these foods. According to the same study, the authors conclude that the difficulties of a restrictive diet can be one of the causes for the early interruption of breastfeeding (21). This mechanism could be one of the explanations for the premature cessation of breastfeeding of our sample.

The difficulties during breastfeeding also have a significant relationship with the abandonment of breastfeeding. The problems reported by the participants in this study were registered in literature as transitory (13,22), which reinforces the need to provide more information about the management of these difficulties, so that they can be overcome and, consequently, not compromise the continuity of breastfeeding.

The duration of pregnancy was also a non-modifiable factor that significantly influenced breastfeeding. In the present analysis, women who had their labor induced had the highest rates of early breastfeeding cessation. However, the scientific literature has not reached a consensus about the topic, since some authors claim that the form of birth influences breastfeeding duration (23), however, other authors found contrary results (14,24).

In conclusion, breastfeeding must be widely encouraged, due to its countless benefits for maternal-infant health and also for the whole society (2,25,26). Since the information about breastfeeding obtained by women comes mostly from health professionals (17), it is important to increase the awareness, commitment, and training of these professionals for the management of modifiable barriers that prevent the optimal duration of breastfeeding, so that they can implement the support which improves the practice.

Limitations of the study

Regarding the limitations of this study, it is important to mention the self-reported data collection, as the results may be subject to social desirability. The sample is composed mostly of married women or women within a stable union, presenting an average socioeconomic level, and the large number of women who breastfeed their children for more than 2 years might not be representative of the Portuguese population. The fact that the questionnaire was not previously validated nor a pre-test performed are also important limitations that should be assumed. We could also mention the memory bias; however, the literature sustains that maternal memory of the duration of breastfeeding is a reliable and valid estimate (27). Finally, it is important to refer that the cross-sectional design of the study is an important limitation as it is not possible to establish a cause-effect relationship.

The authors thank all the participants of this study.

The authors declare no conflict of interest.

9. World Health Organization. (2014). WHO | WHO Global Data Bank on Infant and Young Child Feeding. Who, 1–2. Retrieved from https://apps.who.int/nutrition/databases/infantfeeding/en/index.html

Copyright © 2023 ALIES. All Rights Reserved.Designed by templatemesh.com Powered by Joomla!