Use of chromium-enriched yeast in the manufacture of French bread

Bread enriched with chromium has been associated with improved glycemic control. The purpose of this study was the production of a bread with chromium (Cr III) -enriched yeast which maintained overall bread quality. A formulation of French bread was prepared using an inactive yeast enriched with Cr III for comparison against a control bread made with standard yeast. Yeast fermentation power and bread color and texture were evaluated. There were no differences in the color (crumb and crust) or the firmness of the bread crumb, despite a significant difference (p < 0.05) in the yellow tonality (b*) of the bread crumb. Regarding cohesiveness, samples present similar values but a significant difference (p < 0.05) was detected between control and chromium breads. The average value of chromium in bread after processing was 1.717 μg/g in dry samples. This study concludes that it is possible to produce French bread with chromium enriched - yeast without changing the technological process or dramatically affecting its color and texture characteristics.

Bread is widely consumed as part of traditional diets and is an important source of dietary energy. Bread has been one of the bases of daily food, due to its nutritional characteristics and palatability, highly appreciated by consumers. The variety of cereal products and production techniques vary considerably around the world. The nutritional value of bread may increase depending on the mixture of other cereal flours or ingredients other than wheat flour (1).

Despite the variety of bread available on the market, consumers tend to prefer different types of bread in addition to the traditional white bread for some reasons, such as being healthy, having good taste, for the nutritional value and being recommended by some health professionals (1). In the current market context, and according to the European Food Safety Authority, the development of functional foods is a main priority to achieve beneficial nutritional properties and/or reduce risk factors for the development of a human disease (2). In this context, bread is an excellent vehicle for introducing functional ingredients. As a staple food, it contributes to the highest proportion of dietary carbohydrates and constitutes an inseparable part of the standard of the Mediterranean diet. In addition, consumption is a strategy to achieve better glycemic control, being beneficial to health (3,4).

Trivalent chromium, or chromium 3 (Cr III), is found in foods and dietary supplements and is used to reduce the risk of diabetes or to complement conventional medical therapies used to control diabetes (5), although the World Health Organization recommends that chromium III supplementation should not exceed 250 μg/day (6).

According to Racek et al. (7), bread with yeast enriched with Cr was beneficial in patients with type 2 diabetes mellitus, probably due to lower insulin resistance, leading to improved glucose tolerance. Yanni et al. (8) showed that bread enriched with Cr yeast (at a concentration of 500 μg Cr / 50 g of carbohydrates) is capable of reducing the postprandial glycemic response.

The objective of this work was to produce a bread with physical characteristics of color (crust and crumb) and crumb texture (firmness and cohesiveness) within the commercial standard of French bread, while taking advantage of the health benefits of including chromium in the diet of consumers.

Based on the fact that Lalmin® Cr2000 contains 0.2% chromium (Source: https // bio-lallemand.com / health-ingredients / products / lalminr-chromium /), 60 mg of this product will provide 120 μg of chromium, each bread produced (60 g of raw dough), according to the formulation in Table 1, will have approximately 0.2 mg of chromium.

The formulation of French bread is presented in Table 1. Initially, wheat flour T65 (Nacional), dry yeast (Instaferm), salt, Clean Label S500 improver (Puratos) and Lamin® Cr2000 (only use in the sample with Cr) were added to the kneader (Brettechnica, Portugal) and previously mixed (2 min), at low speed. The water was then added, and the mixture kneaded at the fastest speed, until it was smooth and elastic (10 min). After resting for 15 min, in the incubator (Ramalhos), at a temperature of 26º- 28º C, the dough was divided into 60 g pieces, moulded in the shape of French bread in the modeler (Brettechnica). After being placed on the baking sheets, the breads were left to rise for 60 min at 30º C in the incubator (Ramalhos, Portugal). Finally, with the help of a stylus, cuts were made in the breads and then they were baked in the oven (Ferneto, Portugal), preheated to 220º C (upper element) and 230º C (lower element), with low humidity level for 15 min. In the production of control breads, the same procedure was repeated, with the exception of the addition of Lalmin® Cr2000. 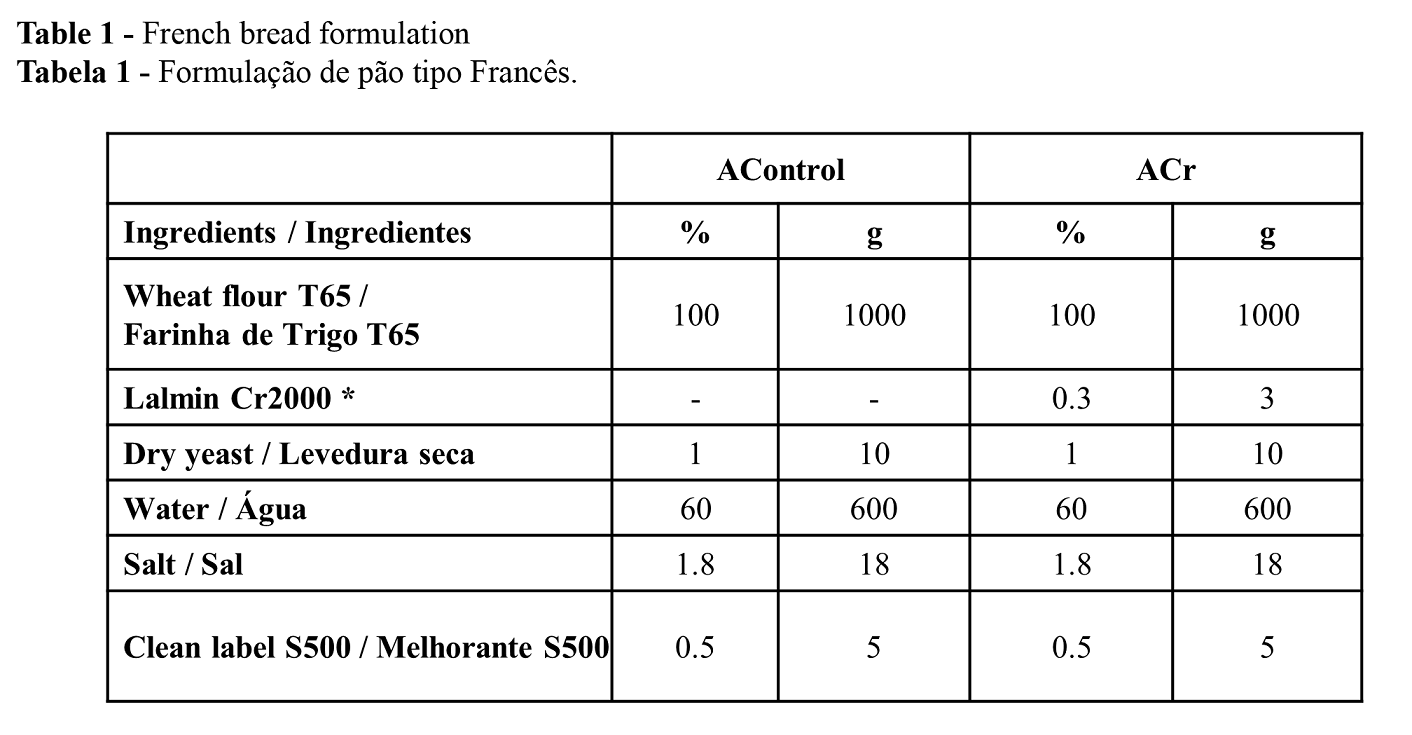 The bread samples were cut into 2 cm slices measured with a digital caliper (Platinum, United Kingdom). The ends of the bread were neglected, leaving only the central part. The analysis of texture and color were performed after cooling the breads on the day they were prepared.

To determine the fermentative power of the yeast for the control and Cr samples, 40 g × 4 of dough was removed from each of the samples, after kneading. That quantity was placed in beakers for measuring the volume, left to incubate at 30º C, being removed and photographed at 30, 60, 90 and 120 min (4 beakers/ sample).

The total color difference between the bread containing Cr and the AControl was calculated using the equation:

The bread samples were cut into 2 cm slices with the aid of a digital caliper (Platinum). The texture was evaluated on a TA-XTplus texturometer (Stable MicroSystems, United Kingdom) equipped with a 5 kg load cell using Texture Profile Analysis (TPA). A cylindrical probe 19 mm in diameter (P19), a cross-head speed of 1 mm/s and a waiting time of 5 s between the two penetration cycles were used. The measurements were repeated ten times for each bread sample. Firmness and cohesiveness were the texture parameters used to discriminate different bread samples, as has been previously used by other authors (9,10). Firmness is the maximum resistance to penetration (N) and cohesiveness is related to the level of structure between the elements that take part in the bread structure (11).

The measurement of Cr III was carried out using a validated methodology and used by Soares et al. (12) in bread samples after drying.

Data were presented by means (standard deviation), the Shapiro-wilk test was used to test the normality of the distribution of variables. The variables with normal distribution were tested using the student's t test. The b* color of the crust did not present a normal distribution and was tested by the equivalent non-parametric test, the Mann-Whitney test. The data were analyzed using SPSS version 23.0 (IBM Inc., Armonk, NY, USA),. Results were considered statistically significant when p-value < 0.05.

The dough volume test that evaluates the fermentation power of yeast allows to determine if Cr III influences the fermentative capacity (13). The results obtained are showed in Figure 1 and in Table 2. It is possible to observe that in shorter fermentations (up to 60 min) the volume of the dough does not differ between the AControl and ACr samples. And in longer fermentations (90 and 120 min) the ACr sample has greater volume than the AControl. This is in agreement with the results obtained by Jialong et al. (14), where the growth of S. cerevisiae in the presence of chromium showed a lag phase much longer than in the absence of chromium. In terms of technological performance, this effect of chromium on yeast activity may be more interesting in long-fermentation breads, which are increasingly produced and consumed. 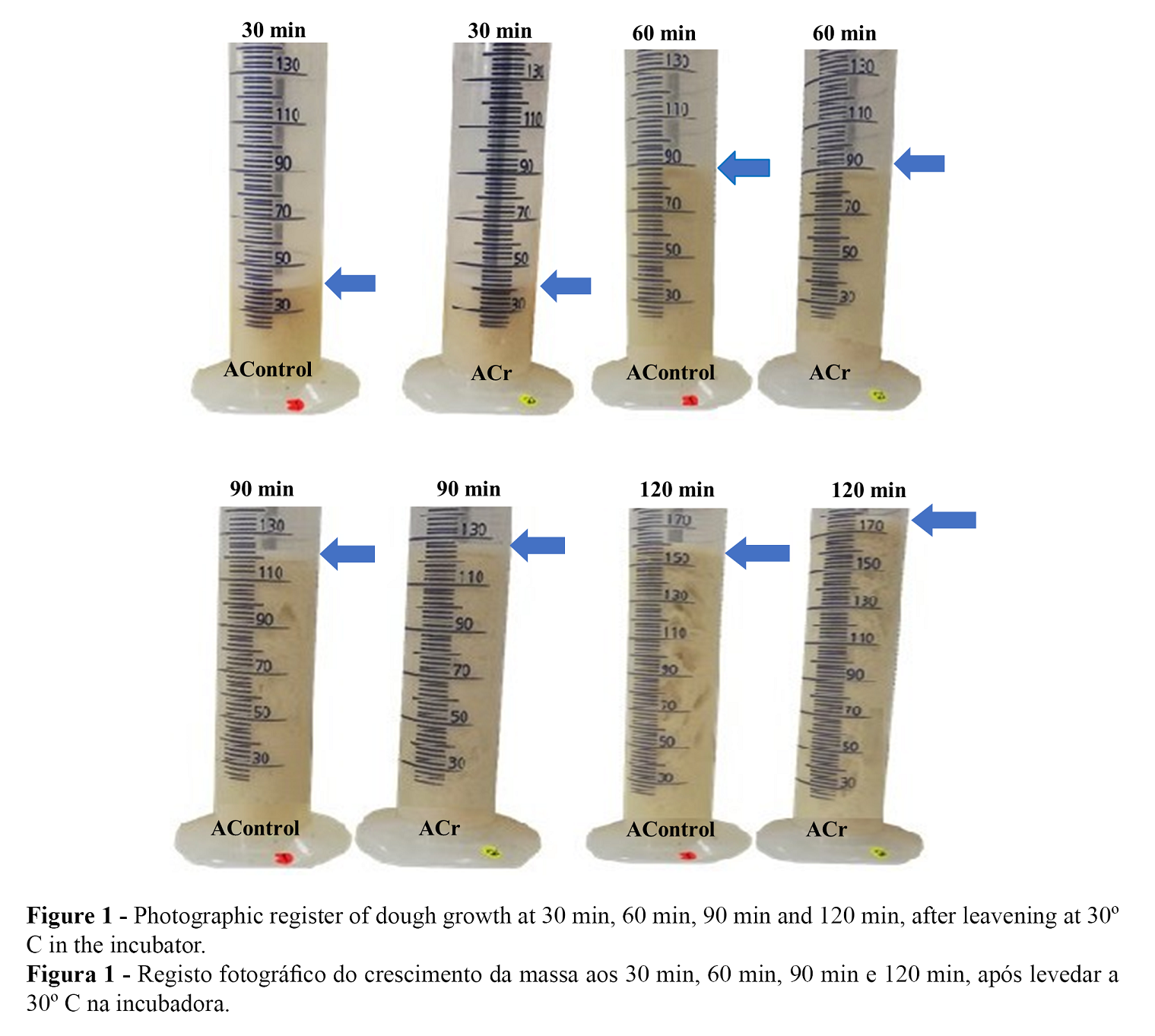 The results obtained for the crumb color, crust color and crumb texture parameters are presented in Tables 3 and 4.

Both samples have a high L* parameter, a* negative (green) and b* positive (yellow), for the crumb. A significant difference (p < 0.05) was found between the AControl and the ACr sample for the b* parameter. L* and a* values do not present significant differences (p > 0.05). The color of the crumb is more directly related to the coloration of the ingredients, since it does undergo less reactions during baking, in contrast to the crust that undergoes Maillard reactions, changing it drastically (15). Thus, the sample produced with Cr has a slightly more yellow color, probably due to the coloring of Lalmin® Cr2000. Bread crust samples present high L*, a* positive (red) and b* positive (yellow), and they do not present significant differences (p < 0.05) between ACr and the AControl, suggesting that the addition of Lalmin® Cr2000 does not affect the color, nor will it affect the consumer's choice. In addition, the literature indicates that the L* brightness values of the crust around 70 are well accepted by consumers (15), which is in line with the results obtained (~ 72). For coordinates a* and b*, no patterns were found in the literature. The total color difference ΔE* between Acontrol and ACr is 1.29 in crumb and 0.99 in bread crust. Despite higher difference was obtained for crumb, several authors consider that the human eye only can differentiate colors when the total color difference ΔE* > 5 [16].

Regarding texture, values obtained by the Texture Profile Analysis (TPA) may have been affected by the characteristic of the samples that had approximate size and shape, but not standardized. For firmness values there are no significant difference (p < 0.05) between samples, and AControl cohesiveness is significantly higher (p < 0.05) compared to ACr, despite the similarity values.

These results suggest that French bread enriched in chromium can be produced and consumed in the same manner as traditional French bread, since they have very similar color and texture, both for crust and crumb.

From the nutritional point of view, according to the studies published by Yanni et al. (4), Costello et al. (5), and Raceck et al. (6), French bread made with yeast with the addition of chromium would have a differential related to its supply of chromium and its contribution in improving metabolism, thus the two food EFSA health claims approved for chromium III could be used (17). The average value of chromium in bread after processing was 1.717 μg/g in dry samples. Yanni et al. (8) showed that the daily consumption of a yeast enriched with Cr with the same proportion of carbohydrates was able to assist in the treatment/control of diabetes by improving glucose tolerance and insulin resistance, with a significant reduction in glycated hemoglobin (HbA1c), weight loss, and lower systolic blood pressure. Thus, this product may represent an excellent alternative to fiber bread, a current option to control postmeal plasma glucose, which has characteristics different than white bread and thus reduces the interest of some consumers (18,19).

Although some studies have been published regarding the impact on human health of using yeast enriched with Cr (4,5,7,8), to the best of our knowledge, there are no studies regarding the impact of yeast enriched in chromium on the overall bread quality (texture and color). The results of our work demonstrate that it is possible to produce a bread using yeast enriched with Cr III without dramatic changes to its texture and color parameters. Based on these results, the development of this product for future marketing is of interest.

Nevertheless, our study had some limitations, including the use of French bread for the assessment of physical properties. Further, the breads produced were cut, resulting in a lack of homogeneity in the color of the crust. The number of measurements was increased to minimize this variability. Furthermore, despite the generally existing correlation between sensory results and the instrumental results obtained in the Texture Profile Analysis and with the colorimeter, it will be important to apply hedonic testing to these breads using a consumer panel, especially regarding flavour. Evaluations of the effects on glycemic index and the postprandial response are also suggested.

The authors declare there are no financial or personal relationships that could present a potential conflict of interests.

10. Nunes M.C., Fernandes I., Vasco I., Sousa I., Raymundo A. (2020). Tetraselmis chuii as a sustainable and healthy ingredient to produce gluten-free bread: Impact on structure, colour and bioactivity. Foods, 9, 579.

17. Commission Regulation (EU) No 432/2012 of 16 May 2012, establishing a list of permitted health claims made on foods, other than those referring to the reduction of disease risk and to children’s development and health.