Cancer is the second leading cause of death globally. World Health Organization recorded an estimated 9.6 million deaths attributed to cancer in 2018. There is an urgent need for new anticancer drugs with novel modes of action. Natural products remain a valuable source for the identification and development of novel treatment options for cancer. Plectranthus species are well-known medicinal species used extensively for the treatment of different illnesses. These species are rich in diterpenoids which are reported to be responsible for various pharmacological activities including cytotoxic activities. Brine shrimp (Artemia salina) is broadly used in lethality studies and this model is a convenient starting point for cytotoxicity study when screening for general toxicity of natural products. This assay is based on their ability to kill a laboratory cultured nauplii. In this work, we report the general toxicity of some derivatives from 6,7-dehydroroyleanone (1) and 7α-acetoxy-6β-hydroxyroyleanone (2) compounds. The A. salina bioassay is a simple, rapid, and low-cost test, and is very useful for preliminary assessment of general toxicity in natural products thereby guiding the determination of possible biological activities.

During the past three decades, there has been significant progress in both the understanding and treatment of cancer. However, cancer remains the second leading cause of non-communicable disease deaths in the world. In 2018, there were over 18 million new cancer cases and approximately 10 million people died from the disease globally (1,2).

Medicinal plants are considered potential sources for drug development and many novel products. Natural products play a relevant role in cancer therapy today. Substantial numbers of anticancer agents used in the clinic are either natural or derived from natural products from various sources such as plants, animals, and microorganisms (also of marine origin) (3,4). During the last few decades, a wide range of cytotoxic agents were discovered from plants, and some of these are used as anti-cancer drugs. Paclitaxel (Taxol), for example, one of the most known chemotherapy drugs of natural origin, was derived from the bark of Taxus brevifolia and is one of the most active cancer chemotherapeutic drugs (5).

Artemia salina, commonly known as brine shrimp, is a tiny halophilic invertebrate belonging to the Phylum Arthropoda and Subphylum Crustacean, and play an important role in saline aquatic and marine ecosystems. In addition to usage as feedstuff in aquaculture, it is also highly valued for its larvae’s application in toxicity detection (6). A. salina has gained popularity as a test organism for short-term toxicity testing because of its ease of culture, short generation time, and cosmopolitan distribution (7). In addition, its dormant brine shrimp eggs remain viable for many years and are therefore a suitable biological source (8). Other advantages of using brine shrimp in toxicity testing include (i) rapidity (i.e. 28–72 h from hatching to the first endpoint),(ii) cost-effectiveness, (iii) the availability of nauplii hatched from commercial durable cysts (eggs) (i.e., homogeneity of the population, availability all-year-round without the necessity of culturing) (9). Its use as a test organism is based on cellular mechanisms that may occur via necrosis, characterized by loss of membrane integrity, death of cell or apoptosis, a genetic program of controlled cell death (10). The significant correlation between the brine shrimp assay and in vitro growth inhibition of human solid tumor cell lines demonstrated by the National Cancer Institute (NCI, USA) further boosts the use of A. salina for general toxicity testing (11–14). This correlation is significant because it shows the value of this bioassay as a pre-screening tool for antitumor drug research (15–17). In the present study, we evaluated the general toxicity of 6,7-dehydroroyleanone (1) and 7α-acetoxy-6β-hydroxyroyleanone (2) derivatives using the A. salina model. 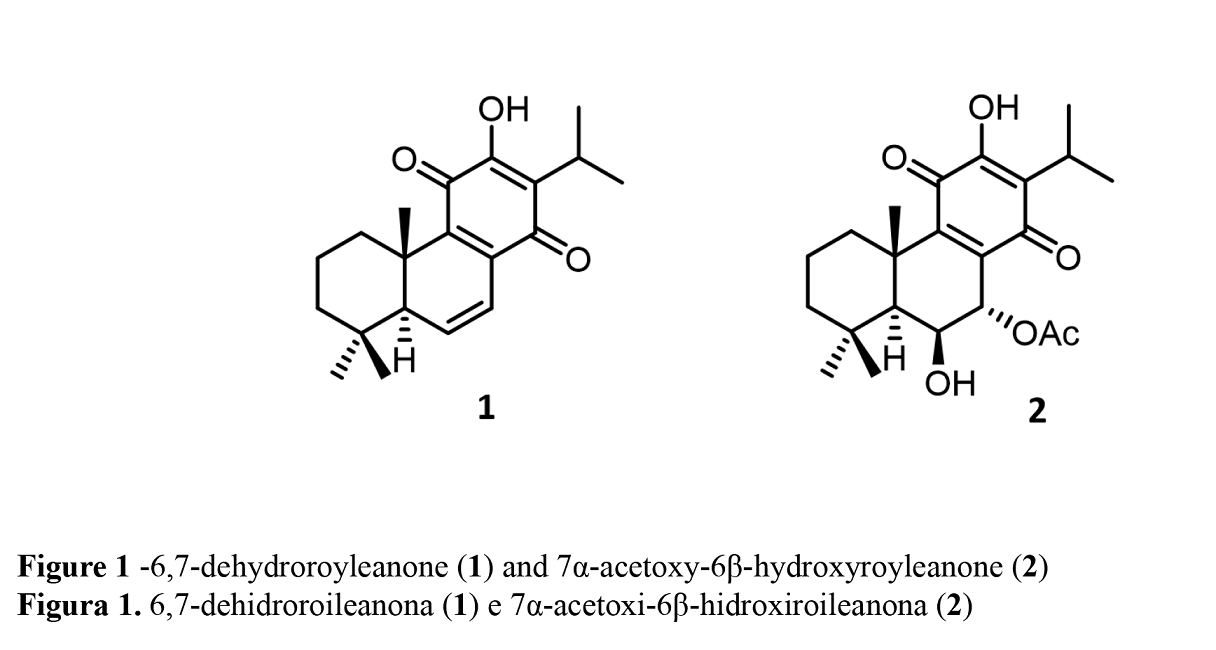 The reactions, purification, identification, and stability of royleanone derivatives were carried out and previously reported in the study of Garcia et al. 2020 (21), Schemes 1 and 2. 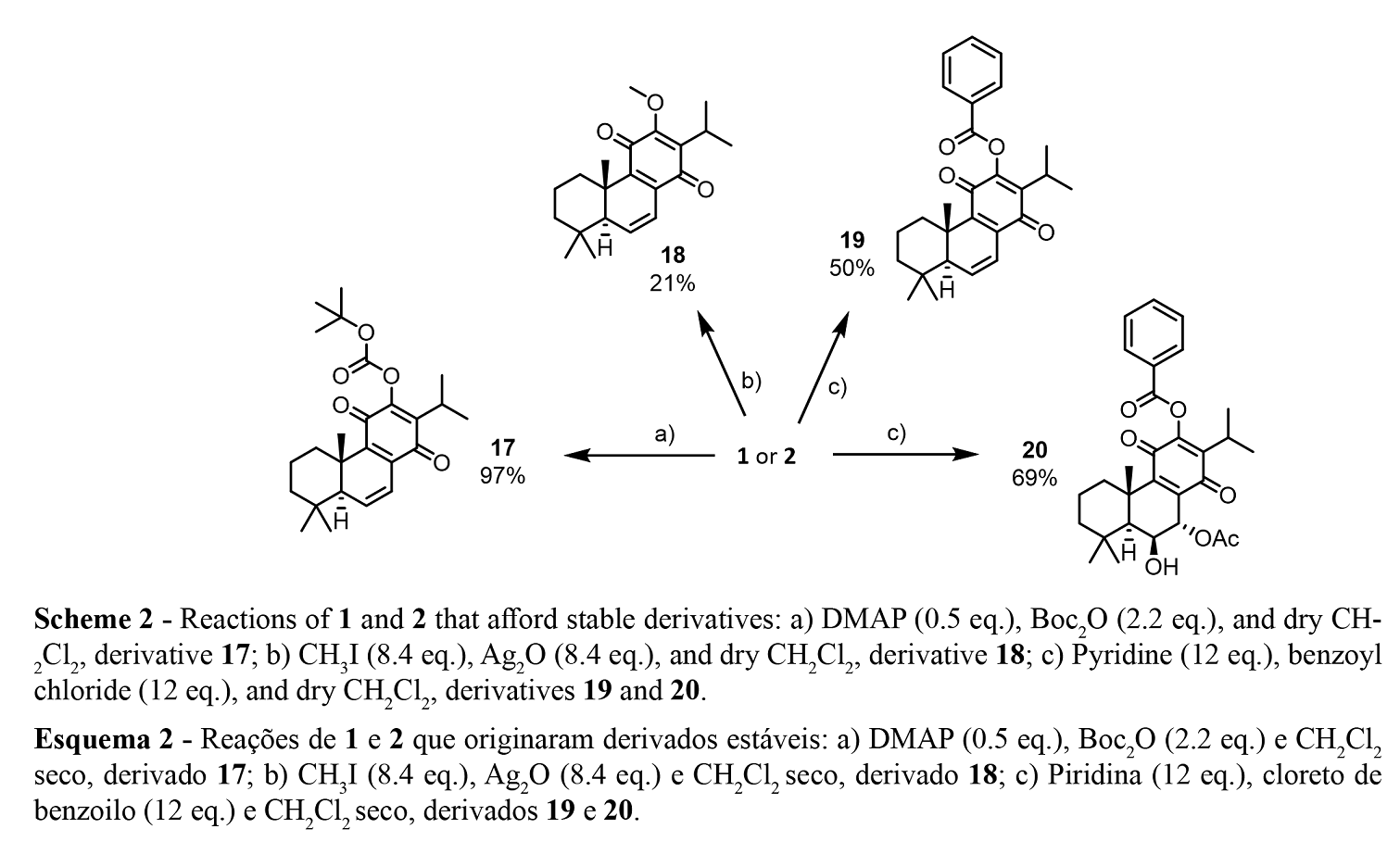 Samples of each tested compound were prepared at a concentration of 100 ppm in a salt medium (Brine shrimp salt obtained from JBL GmbH and Co. KG, D-67141, Neuhofen Germany) at a concentration of 35 g/L. A 24-well plate was used, and around 10 to 15 larvae were added to each well containing salt medium. Afterward, each compound was added (100 µL) to the corresponding wells, and the plate was stored for 24 h at 25ºC. After 24 h, the number of dead larvae in each well was recorded. To determine the total number of larvae in each well, death was induced on the remaining living larvae by adding potassium dichromate (K2Cr2O7) at 1 mg/mL.

After 24 h, all dead larvae were counted and the mortality rate (%) was determined according to Equation 1. Dimethyl sulfoxide (DMSO) at the same concentration of the samples (100 ppm) was used as a negative control. Four replicates were used for each test, and the assay was performed in triplicate.

The results were expressed as the mean value ± SD. Comparisons were performed within groups by the analysis of variance using the ANOVA test. Significant differences between control and experimental groups were assessed by the SigmaStat software (StatSoft, Tulsa, OK, USA). A probability level p < 0.05 was considered to indicate statistical significance.

Several hemi-synthetic reactions were performed to prepare a small library of compounds of enhanced cytotoxic potential. Both natural compounds 1 and 2 (Figure 1) were subjected to short-time microwave-assisted Mitsunobu and benzoylation reactions. Natural compound 2 was also subjected to a carbamoylation, tosylation, methylation, and introduction of Boc (tert-butyloxycarbonyl) and TBDPS (tert-butyldiphenylsilyl) groups. The predicted structures and the isolated derivatives (3 to 20) are shown in Schemes1 and 2.

The introduction of Boc group (17), methylation (18), and benzoylation (19 and 20) reactions were accomplished with success, affording pure products with overall good yields (97% for derivative 17, 28% for methylated derivative 18, and 50% and 69% for benzoylated derivatives 19 and 20, respectively), scheme 2. Unfortunately, products 3 to 16 (Scheme 1) displayed a high rate of decomposition, occurring especially after isolation. 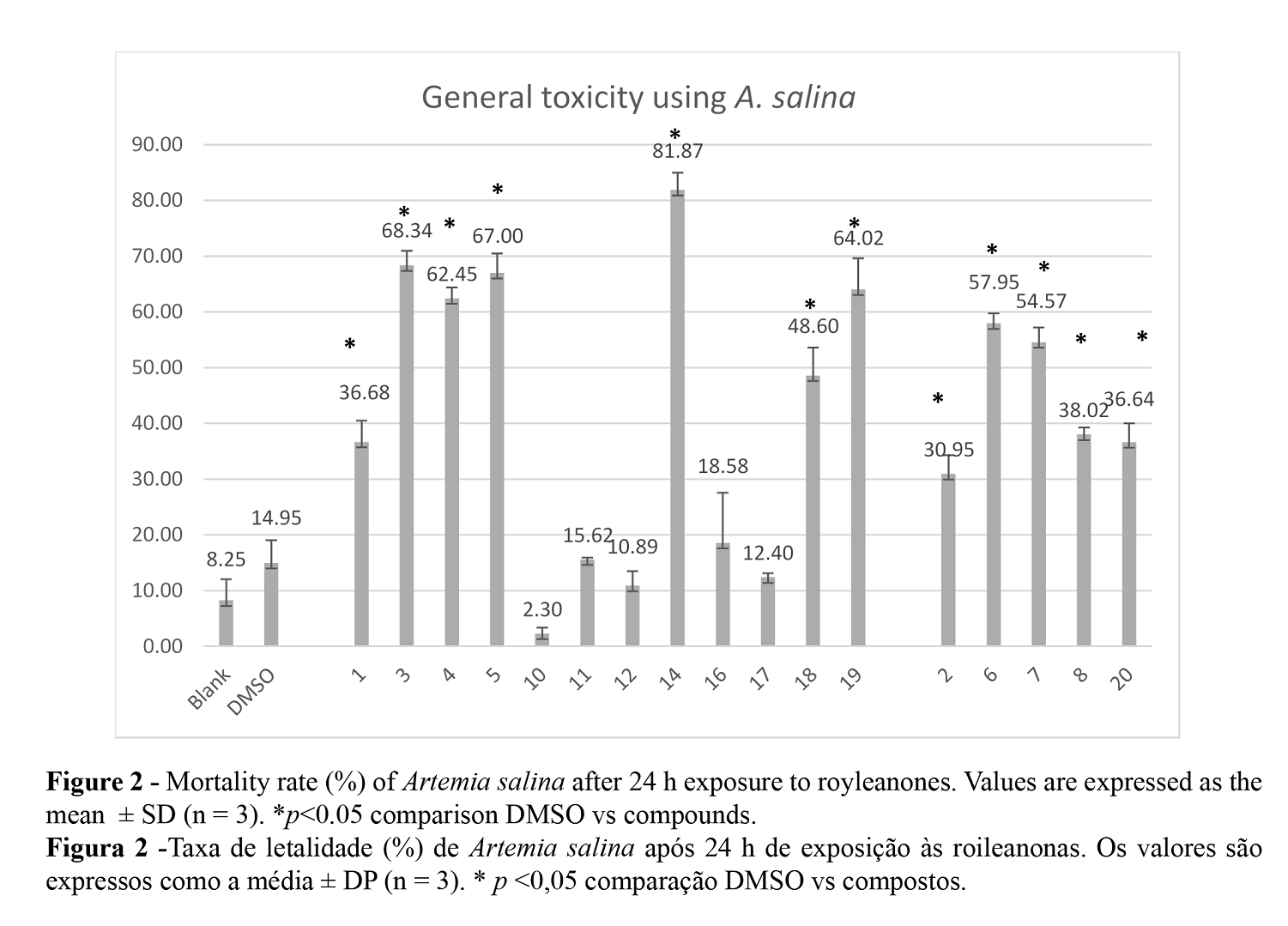 According to the results, natural product 1 displays moderate toxic activity (36.68% at 100 ppm). The unstable tosylation derivative (9) presented the highest mortality rate (81.87%). Overall, in agreement with this model, the chemical modifications induced in natural royleanone 1 structure through microwave-assisted Mitsunobu reactions, enhanced the toxic activity in all derivatives (3 to 5). Likewise, stable methylated 18 and benzoylated 19 derivatives increased the toxicity of the original scaffold (1). The derivatives 9 - 11, 10, and 11 displayed the lowest mortality rate.

Considering that only derivatives 17 to 20 were stable, that 18 was obtained with a lower yield, and that 17 displayed lower toxicity, this shows that compounds 19 and 20 (both esters) were the most promising of the targets produced.

The reactivity of two natural royleanones 1 and 2 was explored. Several hemi-synthetic reactions were performed, and the obtained products were limited by stability issues: the derivatives 3 to 16 tend to degrade after isolation. Successful results were obtained when performing methylation and benzoylation, as with the introduction of a BOC group, affording pure compounds (17 to 20), with overall good yields.

General toxicity using the A. salina model has been established for the obtained products. As such, products 3 to 8, 14, and 18 to 20 have increased the toxicity of the lead compound. Products 19 and 20 displayed the best results regarding their stability and high toxicity, thus suggesting that the formation of esters is a more convenient approach for future derivatives.

The authors report no conflicts of interest.