The vegetarian food pattern, more commonly referred to as “vegetarian food” or “vegetarian diet (VD),” is known and has been practiced for several centuries for economic, religious, ethical, environmental, or health reasons (1). Pythagoras is considered the founder of the vegetarian movement, and the people of ancient Greece were also great supporters (1). Religions such as Buddhism, Jainism, and Hinduism also played an important role in promoting the vegetarian diet (1). In the 19th century, with the development of societies, health care units, the publication of books, and the opening of restaurants, the vegetarian movement began its expansion (2). The adoption of a vegetarian dietary pattern has been increasing over the years in Europe, not only among the adult population but also among children and adolescents (3). According to a study published by Meat Atlas in 2014, it is estimated that 2 to 10% of European people are vegetarian (4). In September 2007, Nielsen Media Research conducted a study for the Portuguese Vegetarian Center, being the first to analyze a representative sample of the Portuguese population to determine the number of vegetarians in Portugal. Ten years later, in September 2017, the study was repeated, and the conclusion shows a very surprising evolution. The number of vegetarians has quadrupled in 10 years, with 1.2% of Portuguese not currently consuming meat or fish. In 2007, only 0.3% of the Portuguese population followed this lifestyle and diet (5).

The VD includes a wide range of eating practices, heterogeneous in composition, and with varying restrictions (6). The many types of vegetarian diets share the same characteristic - the exclusion of meat and fish - while some also suppress eggs, milk, and dairy products. This diet is based on foods of plant origin, such as cereals, legumes, roots, oilseeds, fruits, vegetables, nuts, among others (6). According to the Academy of Nutrition and Dietetics, the VD is defined as one that does not include meat (including poultry) or seafood or products that contain these same foods (7,8). According to some studies, meat is a good source of energy and several essential nutrients, such as protein and micronutrients, namely iron, zinc, and vitamin B12 (9). However, epidemiological studies show that high consumption of red and specially processed meat is a risk factor for several chronic diseases, such as colorectal cancer (10), Type 2 Diabetes Mellitus (DM) (11), and cardiovascular diseases (12). Vegetarians, in general, consume less caloric food, since their diet contains a lower total amount of fat and proteins of animal origin (13). The main concern of nutrition professionals in adhering to the vegetarian diet has been the measurement of protein intake, especially regarding essential amino acids (13), as well as some micronutrients such as vitamin B12, vitamin D, and iron (14).

An observational cross-sectional study was conducted between April and May 2020, which included a sample of 74 nutrition professionals. All participants were practicing their profession in Portugal at the time of data collection. There were no other exclusion criteria than the non-practice of the profession, which indicates that subjects of all ages, genders, academic degrees, areas of professional activity, career time, and those who studied at public, private, or foreign universities were included. Nutrition professionals were recruited with the support of professional associations specific to this type of individual. The questionnaire was shared through their platforms, and emails were also sent to all members. All participants were informed about the objectives and purposes of the study prior to data collection, were informed of the anonymity of their data, and gave their signed informed consent.

Data collection was performed using an online non-validated questionnaire. This questionnaire was specifically developed by the researchers for these data collection and consisted of 26 questions. Two questions were regarding sociodemographic characteristics (age and gender), 5 regarding professional graduation (place of graduation, academic degree, area of professional activity, time of activity, and frequency with which they attend nutrition symposia and congresses), and the remaining 19 questions were regarding the position of nutrition professionals regarding the VD. These final questions included: whether (or not) it would be healthy, if adherence would be discouraged, if animal products would be indispensable, to what age groups would they recommend this type of diet, if it has long and short benefits, if it would be possible to maintain this diet throughout life, if it would have all the necessary nutrients, if adherence would be possible without the use of supplements and which ones would be most recommended, if the absence of animal products makes this diet healthier, if vegetarians are at higher risk of developing anemia, if this diet is recommended for athletes, if the consumption of dairy products and eggs is recommended, and if the VD is recommended as a weight-loss method. All the questions were multi-choice, and no open answer was also available for each question.

The acquired data was entered into the Excel database and transformed into numeric codes to be transferred to the IBM SPSS Statistics software version 26. The distribution of the selected characteristics between the groups was compared using Pearson χ٢ tests for categorical variables, in which the units were expressed in % (n). All analyses of the nutrition professionals’ opinions on the VD were performed according to the participants’ year of graduation (YG). To determine this relationship, the YG was divided into two analysis groups: from 1980 to 2009 and from 2010 to 2019. The objective of this analysis was to observe differences between several decades of training and the most recent scientific evidence regarding the VD as the bibliography on the subject has evolved greatly in recent years, and it is important to know the professional updating of nutritionists and dietitians. All statistical tests performed were two-tailed tests and the level of significance was considered to be p <0.05.

The sample consisting of 74 participants was characterized based on the YG, in which 23 participants graduated between 1980 and 2009, and 51 between 2010 and 2019. This data was statistically related to gender, year of birth, and time in professional practice (Table 1). No other significant differences were observed regarding the place of training, academic degree, the area of practice, or the frequency that congresses were attended. 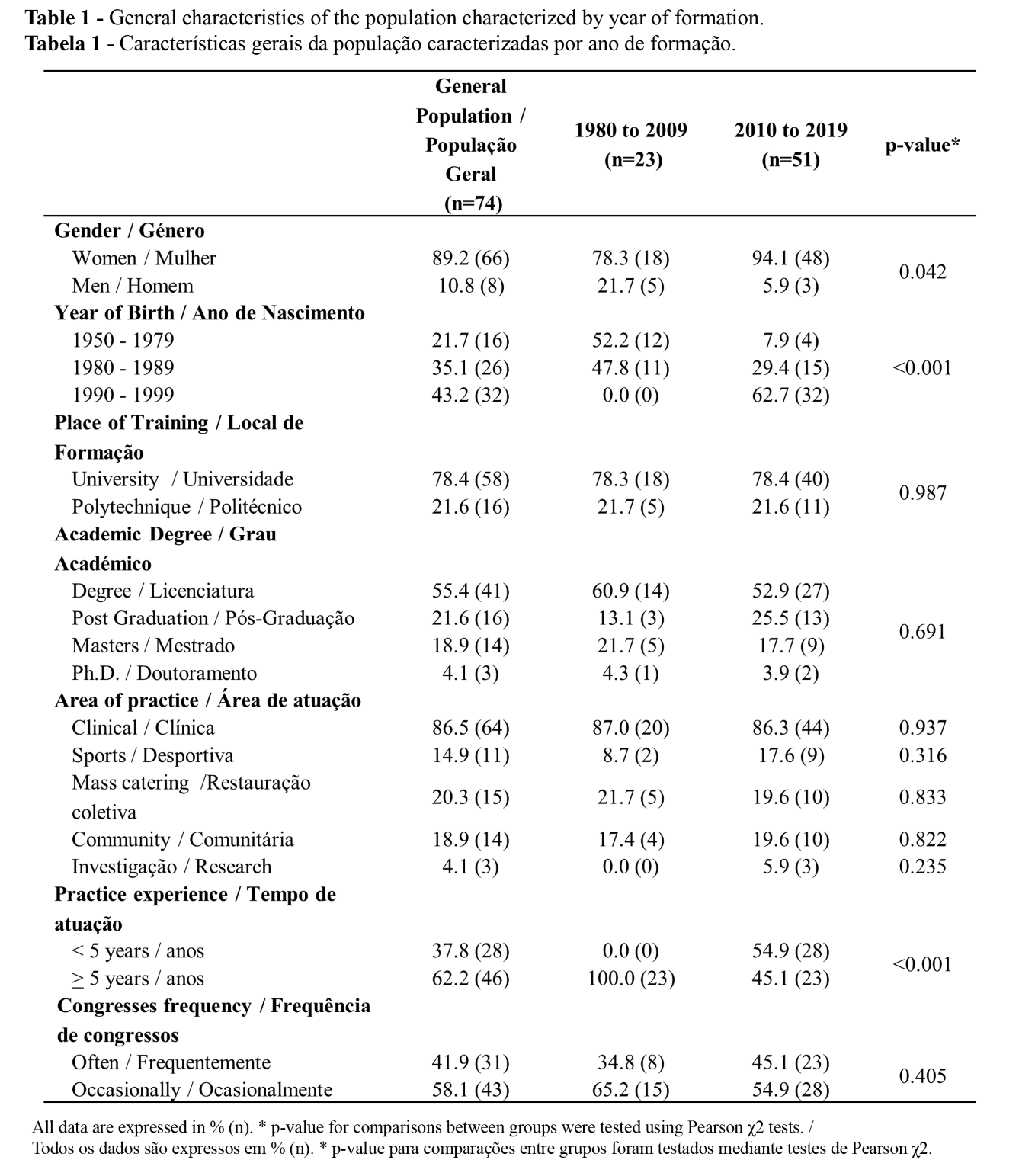 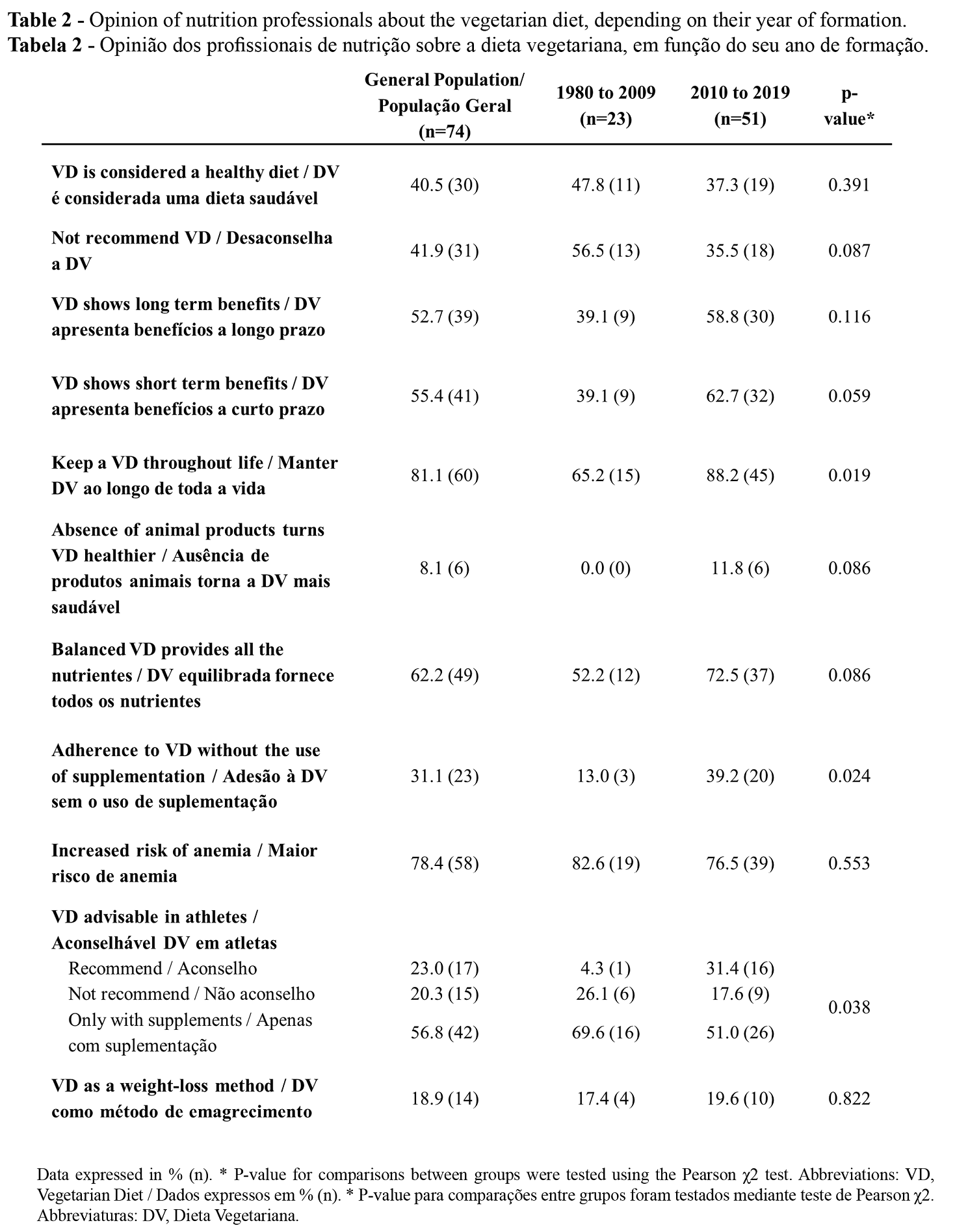 Nevertheless, statistically significant differences were found regarding the possibility of keeping a VD throughout life, where 81.1% of the studied population considered it possible, with the majority of these being in the group graduating after 2009. Concerning supplementation, only 13% of the nutrition professionals who graduated up until 2009 believed that it was possible to adhere to the VD without any type of supplement consumption, however, the percentage increased significantly to 39.2% among the nutrition professionals who graduated after 2009. Finally, the percentage of nutrition professionals that approved the adherence of athletes to the VD increased statistically over time, however, most of them believed that this adherence was only possible with the use of supplements.

The present study aimed to evaluate the relationship between YG and the opinion of nutritionists and dietitians concerning the VD, comparing it with the current scientific evidence. In general, nutrition professionals did not consider a VD to be a healthy diet. However, most nutrition professionals who finished their training after 2009 claim that they advise adherence to a VD, which shows some controversy. Nevertheless, it is important to remember that a balanced VD provides a high intake of dietary fibers and health-promoting phytochemicals, due to the consumption of fruits, vegetables, whole grains, legumes, nuts, and various soy products (15,16). Vegetarians usually have a lower body mass index, lower serum levels of total cholesterol and low-density lipoproteins and blood pressure within the reference values, lower mortality rates from ischemic heart disease, and also a decreased incidence of hypertension, stroke, Type 2 DM, and several types of cancer than non-vegetarians (16,17).

Regarding the consideration of a VD as beneficial in the short and long term, and whether its practice is possible throughout life, controversies were observed between the groups. According to some studies, a low-fat vegetarian dietary intervention, free of all animal products, and with whole foods, can provide significant benefits in both, short and long term (16,18,19). A balanced VD, with or without the inclusion of fortified foods or supplements, meets current nutritional recommendations and is appropriate for all stages of the life cycle (20). The VD may have lower protein quality, a reflection of less favorable amino acid profiles and less bioavailability compared to omnivorous diets (21). Only in the case of a improperly planned VD might there be a reduction in caloric intake and nutritional deficiency of fatty acids, proteins, vitamins, and minerals (22). Nevertheless, it has been described that balanced VD’s are appropriate for individuals during all stages of life, including pregnancy, lactation, childhood, adolescence, elderly, and athletes (23).

As for the need for food supplements, a VD meets current recommendations regarding all nutrients if done in a balanced way, although more attention is necessary regarding vitamin D, omega-3 fatty acids, calcium, iron, zinc, and iodine. However, the use of food supplements and fortified foods provides security against the deficiency of these micronutrients (15). Therefore, although plant-based diets are at risk for nutritional deficiencies, such as protein, iron, vitamin D, calcium, iodine, and omega-3, the available evidence shows that well-planned VD diets can be considered safe, but require high awareness for a balanced intake of the main nutrients (24). Vitamin B12 is an exception, as it is lacking in a VD and should be obtained through supplements (25). Regarding the question of vegetarians being more likely to develop anemia, studies have shown that the lower the consumption of meat, the lower the serum hemoglobin concentrations and, consequently, the higher the likelihood to be anemic (21,26). Regarding adherence to a VD by athletes, the use of supplements is necessary, which is supported by scientific evidence (27). Well-planned and adequately supplemented VD appears to effectively support athletic performance. According to a study carried out in 2019, vegetarian athletes would have to consume an additional amount of protein to achieve the necessary daily amounts compared to a group of non-vegetarians (28). Most nutrition professionals do not consider a VD as a good weight-loss method. Nevertheless, observational studies demonstrate that vegetarians generally have lower body weights compared to omnivores (29). The prescription of VD reduces the average body weight, suggesting a potential value for the prevention and control of pathologies related to weight (18). According to the Academy of Nutrition and Dietetics, the General Directorate of Health, and the World Health Organization, a properly planned VD, including fully vegetarian diets, are healthy, nutritionally adequate, and can provide health benefits in the prevention and treatment of certain diseases (8 ). Nevertheless, the results obtained in the present study point to controversy among nutrition professionals, since a percentage of the sample is not in line with scientific evidence, which further highlights the poor consensus that exists between generations.

It was possible to observe an impact of YG on the opinion of nutrition professionals regarding adherence to a VD, as divergence between the two groups analyzed was noted. However, both groups demonstrated complete knowledge of the most recent scientific evidence. Through this study, there is a need for interventions to encourage updating and professional training of the nutrition professionals, along with participation in discussions and debates that can improve the understanding, confidence, interpretation, and the use of scientific literature to evaluate and apply these concepts in their daily practice.

The authors acknowledge all the participants.

6. Mitek, M., Anyzewska, A., & Wawrzyniak, A. (2013). Estimated dietary intakes of nitrates in vegetarians compared to a traditional diet in Poland and acceptable daily intakes: is there a risk? Roczniki Państwowego Zakładu Higieny, 64(2), 105–109.