Some challengers such as methylnicotinate (MN) have been used in human models to study the anti-inflammatory effect of topical formulations. However, MN skin responses are still poorly understood and widely varied. In the present study we aim to contribute to better characterise those responses. Eight healthy participants were selected. All procedures were approved by the institutional Ethics Committee. Two aqueous MN dilutions (0.5% and 1.0%) were left in contact for 1 minute in the anterior forearm skin. Following exposure, skin reactions were clinically and biometrically assessed at 30, 60 and 120 minutes and compared with baseline. Measurements involved the ICDRG clinical score scale and select analytical technologies - laser Doppler flowmetry, Polarised Spectroscopy, Transepidermal Water Loss Meter, and High Resolution Sonography. Results have shown that MN application evoked a maximal response at 30 minutes with an increase in the ICDRG score between 1-2. Significant changes in TEWL and microcirculation were observed, as was an increased dermal hypoecogenicity (edema), detected by HRS. These effects are compatible with a localised short-duration inflammation and reinforce the interest of MN to be used as a safe and controllable challenger in human models.

Inflammation is a key feature in clinical dermatology, with an enormous variety of factors and mechanisms affecting skin inflammatory processes and their clinical expression in terms of signs and subjective symptoms. These complicated interactions between skin and the immune system and skin and the nervous system, sometimes referred to as the neuro‐immuno‐cutaneous (NIC) system are probably a major component of this reality still far from being fully understood (1-3). From the therapeutic point of view this is a remarkable target for pharma and skin care industries since inflammatory disorders are present during the whole human lifecycle, from the newborn to the elderly (4-6). Market demand is growing widely, such that “over-the-counter” medicines and cosmetics are among the consumers’ preference all over the world, reflecting also easy access and product satisfaction (7,8).

The systematic investment in the safety evaluation of dermatological products before market introduction partially explains this success. In the post-animal-ban testing era, many new approaches for skin irritation testing and risk assessment were proposed in vitro, primarily in human (9,10). Several challengers were progressively developed to assess, again in human, the effectiveness of anti-inflammatory formulations, such as the anionic detergent sodium lauryl sulfate (SLS), benzoic acid, sorbic acid, methyl nicotinate (MN). Some mechanical approaches (friction, abrasive grains, tape-striping) have also been proposed and used as irritants (11,12). A remarkable amount of experimental information accumulated around SLS and MN have led these compounds to be regarded as safe and capable of reproducing a controlled “inflammation-like” state useful for safety and efficacy assessments of many topical products (12-15). However, data shows that SLS is a strong skin irritant which deforms cell membrane proteins, especially when applied under occlusion (0.5% dilutions and higher), provoking an intense, clinically variable, and lasting aggression to the skin not without risk or/and discomfort. (16-18). In turn, MN is a nicotinic acid derivative whose vasodilator capacity seems to be of multifactorial origin (19,20). MN, as benzoic acid, sorbic acid, and nicotinic acid derivatives, is able to provoke nonimmunologic contact urticaria (NICU), the most common form of immediate contact reaction resulting in a rapid inflammatory response without the requirement of previous sensitization. Both challengers (SLS and MN) have also been long questioned for reproducibility (11). Their mechanisms of action and factors that condition individual reactions have not been completely identified (20-23).

Nevertheless, these models have added an enormous amount of valuable scientific knowledge for physiological-pharmacological and toxicological research, even if still far from being complete. In the present study, we try to look further into the action mechanisms of MN in human in vivo skin using different non-invasive technologies.

Eight healthy individuals, both sexes (three men and five women), ages between 20 and 59 years old (mean 41.37 ± 11.32 years old) were selected according to previously defined inclusion/non-inclusion criteria, namely (i) no visible cutaneous lesions and no past or present record of dermatological disease or atopy, (ii) no application of any cosmetics in the test area 48 hours prior to the study at baseline, and (iii) absence of any pharmacological treatment that might interfere with measurements All procedures observed the principles of good clinical practice of the Helsinki Declaration and respective amendments (24) and included informed written consent. The study was previously approved by the institutional Ethical Committee.

Two aqueous MN dilutions of 0.5% or 1.0% were randomly applied (in the form of soaked 5 mm diameter paper discs) in pre-defined areas (1cm2) of the anterior aspect of the forearm with no occlusion. The dilutions remained in contact with the skin for 1 minute before removal. A similar empty area in the same forearm was used as a negative control. Skin functional variables were measured by non-invasive technologies at time 0 (control) and after MN contact at 30, 60, and 120 minutes.

Analytical technologies for the evaluation of the effects of exposure were:

All measurements took place in a controlled humidity and temperature environment (humidity ~50%, temperature 21 + 2 ºC) where participants were allowed to acclimatize for a minimum of 30 minutes prior to evaluations.

The clinical evaluation with the ICDRG score scale revealed that both MN dilutions significantly increased the score after 30 minutes (1.5 ± 0.19 and 1.37 ± 0.18 for 0.5% and 1.0%, respectively). The reaction was visually much more intense at 30 minutes, decreasing almost to the baseline after 60 and 120 minutes (Figure 1). 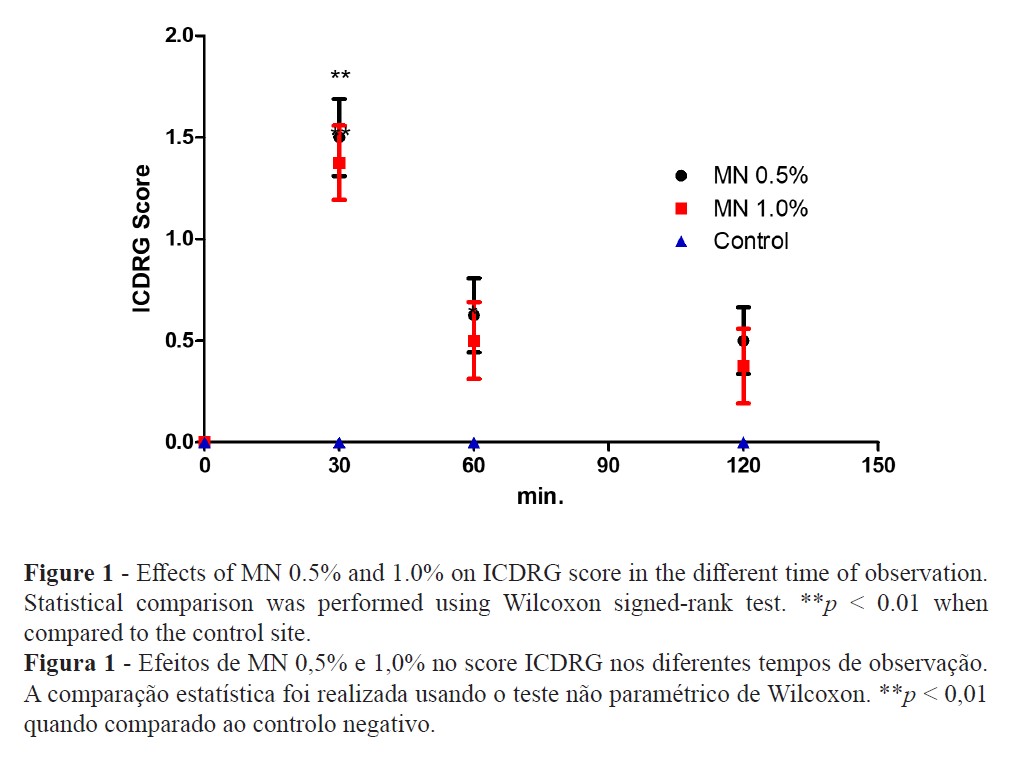 The TEWL increase suggests that MN disturbed the epidermal skin barrier function (Figure 2) while high-resolution sonography (HRS) revealed an increased dermal hypoecogenicity which is suggestive of edema formation (Figures 3 and 4). The skin barrier changes were expected and have been previously reported (27). However, the presence of edema, confirming a cardinal sign of inflammation, as detected by HRS images, have not been previously described under the present experimental conditions. Consistent skin microcirculatory changes were also detected by both LDF and TIVI systems (Figures 5 and 6). 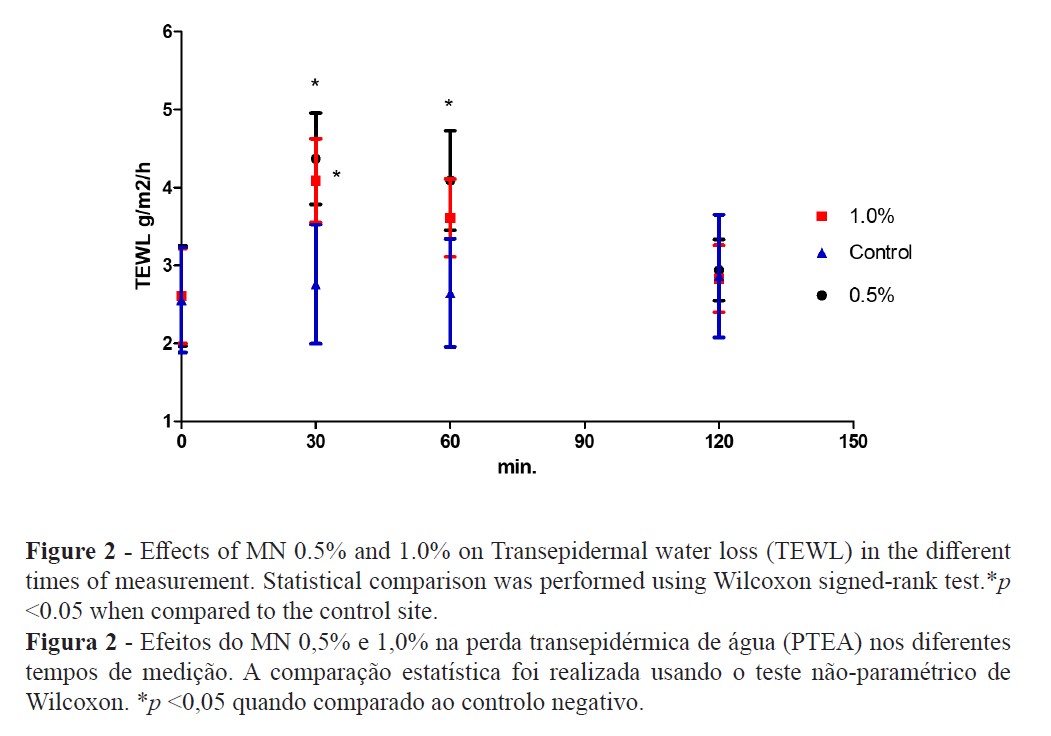 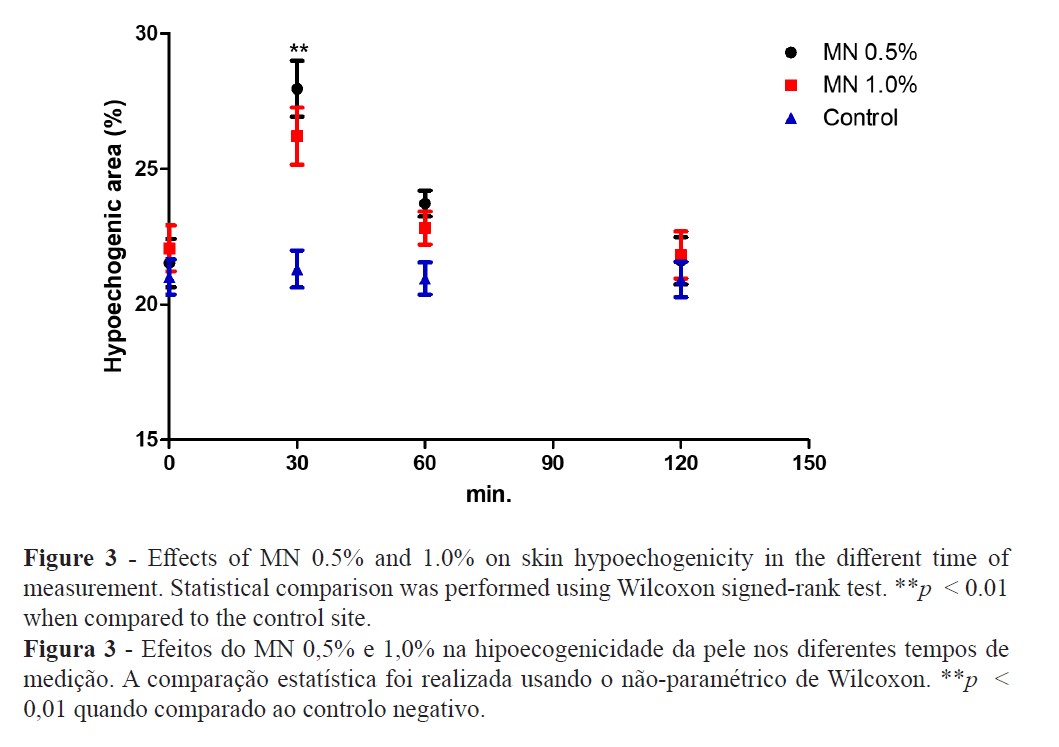 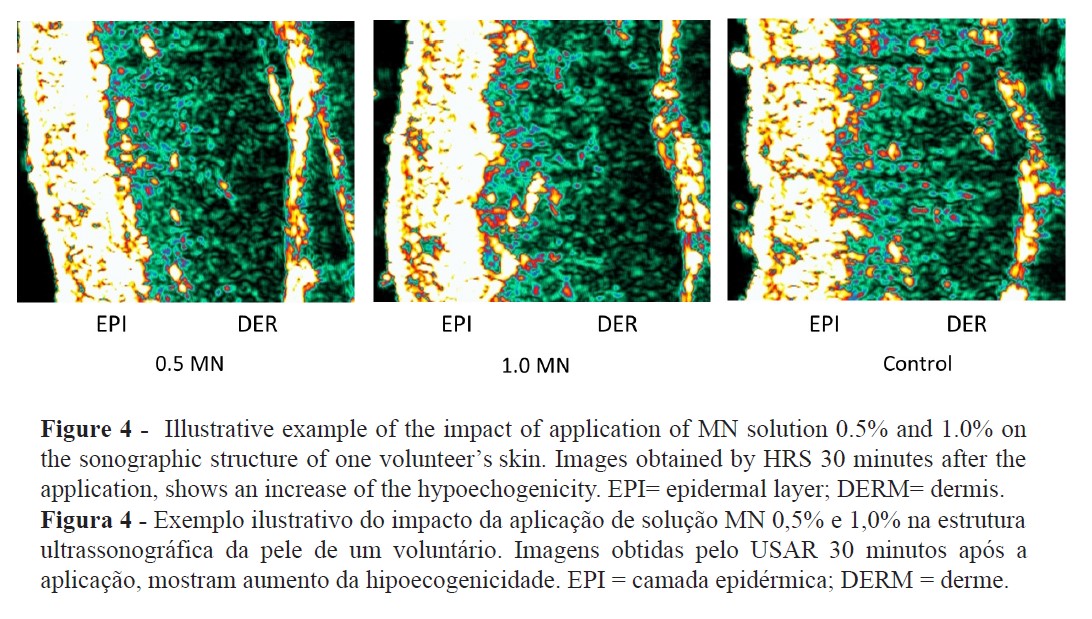 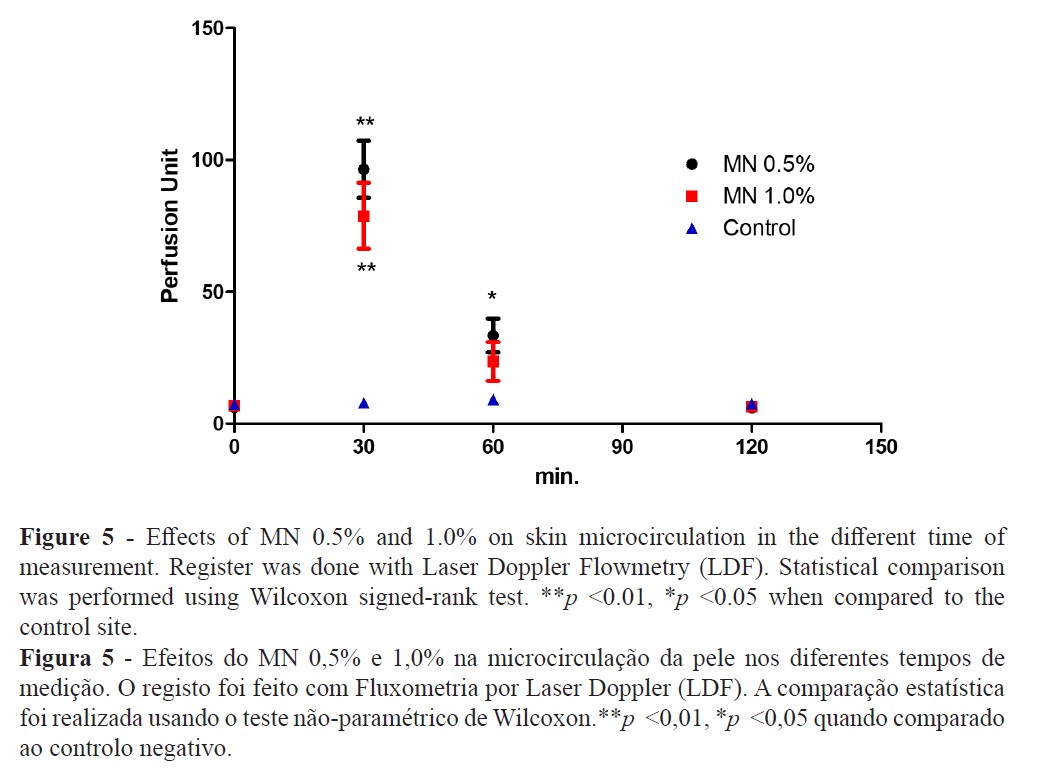 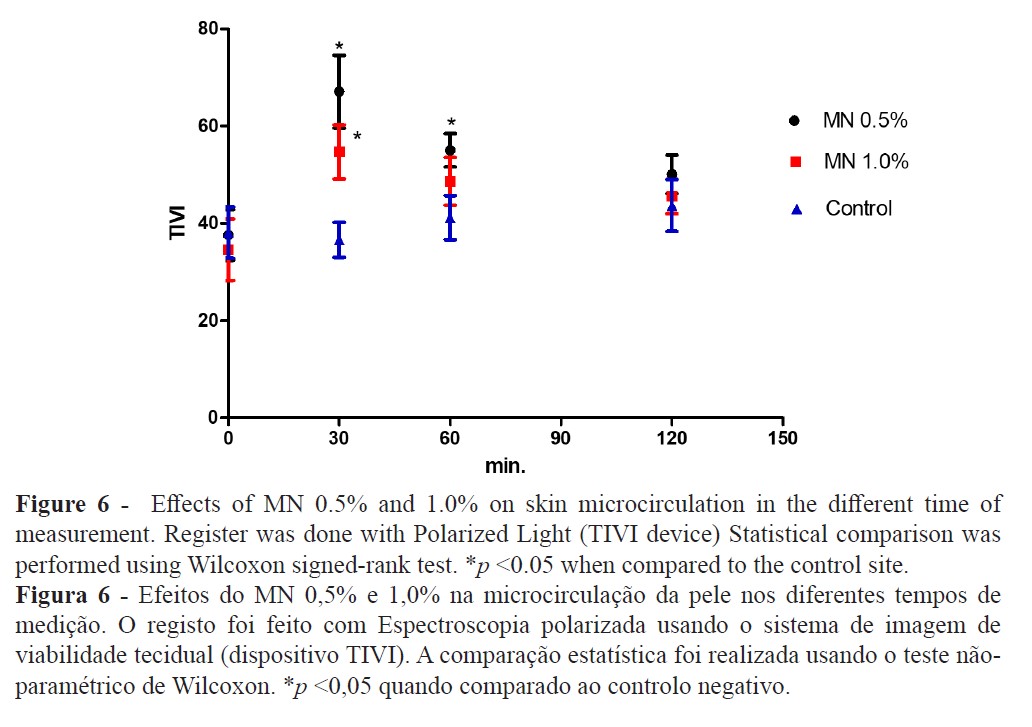 Skin irritation and inflammation are common components of the dermatology glossary used to describe responses to a wide variety of chemical, physical, or biological stimuli. Often its significance is not very clear, being conversely used in distinct clinical processes. Skin barrier disruption, induction of a cytokine cascade, and involvement of oxidative stress are the main pathological alterations observed after cutaneous aggression resulting in a visible or subclinical inflammatory reaction (12,28). Additionally, a strong interindividual variability response to irritants is recognised, but when there is sufficient exposure and high concentrations of the irritant, all individuals are prone to develop this cutaneous reaction (12,28,29).

Our approach suggests that MN application evokes a consistent change of all the skin, from the epidermal barrier to the dermal plexus. This vasodilation is known, described as painless, short-term, and reproducible when evaluated in the same person using the same dose and application site (30). However, the peak response for this vasodilation and, all other parameters as well, occurred at 30 minutes after MN application and, although not significant, we noticed a trend for the highest response at the lowest concentration (MN 0.5% solution). These results are inline with similar observations (31,32) but the opposite has also been described (11). The presence of a localised edema, only detected by the HRS, suggests a short duration inflammatory process that might be mediated by prostaglandins with neurogenic components since histamine and nitric oxide might not be involved in this process (15,31).

Our results contribute to a better understanding of the impact of MN on human skin and its interest as an experimental challenger. Even in low concentrations, MN is capable of modifying the entire cutaneous structure for a short period of time. This seems to be particularly suitable for safety and efficacy studies involving the anti-inflammatory activity. Nevertheless, more studies are needed to better understand and control MN mechanisms of action.

LMR and SFA conceptual design; SFA and CR experimental and data analysis; SFA and LMR drafted and wrote the manuscript in its final version.

This research is funded by Fundação para a Ciência e a Tecnologia (FCT) through grant UIDB/04567/2020 to CBIOS. Sérgio Faloni de Andrade is funded by Foundation for Science and Technology (FCT) - Scientific Employment Stimulus contract with the reference number CEEC/CBIOS/PMHD/2018.

Editors involved in this manuscripts’ authorship had no participation in the review or decision process. All authors have stated that there are no financial and/or personal relationships that could represent a potential conflict of interest.